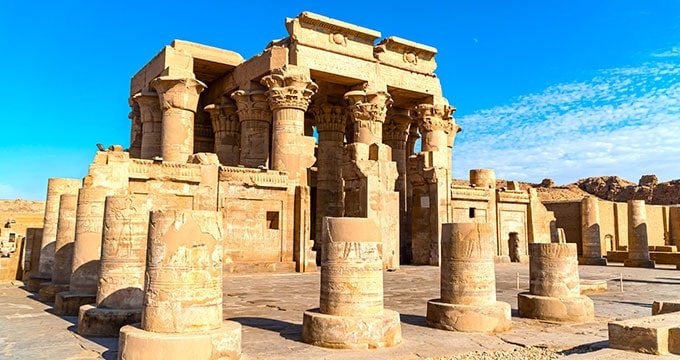 Kom Ombo is an ancient Egyptian temple located in Aswan, Egypt. The temple was built around the 2nd century BC and is dedicated to two gods, Sobek and Horus. It is one of the most impressive monuments in Egypt and has been a popular tourist attraction for centuries.

The temple was constructed during the reign of Ptolemy VI Philometor and is believed to have been built as a place of worship for both Sobek and Horus. The temple consists of two main chambers, one dedicated to Sobek and the other to Horus. Inside these chambers are various statues, reliefs, and hieroglyphs which tell stories about their respective gods.

The Temple of Kom Ombo is also home to many ancient artefacts such as pottery, jewellery, weapons, and tools used by the ancient Egyptians. These artefacts can be seen in various museums around the world today.

The Temple of Kom Ombo has long been a source of fascination for scholars due to its unique architecture and rich history. It has been studied extensively by archaeologists who have uncovered many secrets about its past. Some of these secrets include how it was constructed, the materials used, rituals performed inside it, and much more.

One of the most exciting aspects of Kom Ombo is its dual nature; it was built to honour two gods at once! This unique feature sets it apart from other temples in Egypt at that period. This dual nature can be seen throughout the temple, with each chamber dedicated to one god while maintaining a connection between them through shared artwork and symbols.

The Temple of Kom Ombo also contains many hieroglyphic inscriptions that tell stories about the gods Sobek and Horus and other aspects of Egyptian culture such as religion, magic, medicine, astronomy, mathematics, writing systems, architecture, engineering principles etc. These inscriptions provide valuable insights into how the ancient Egyptians lived thousands of years ago!

In addition to being a source of knowledge about ancient Egyptian culture, Kom Ombo also serves as an important reminder that we should never forget our past or take it for granted! It stands today as a testament to human ingenuity, showing us that even in times long gone, we can still achieve great things if we put our minds to it!

Kom Ombo is an incredible place full of mystery and intrigue that will leave you wanting more! Unlocking its secrets will give you an even greater appreciation for this fantastic monument, so why not visit this incredible site today? You won’t regret it!